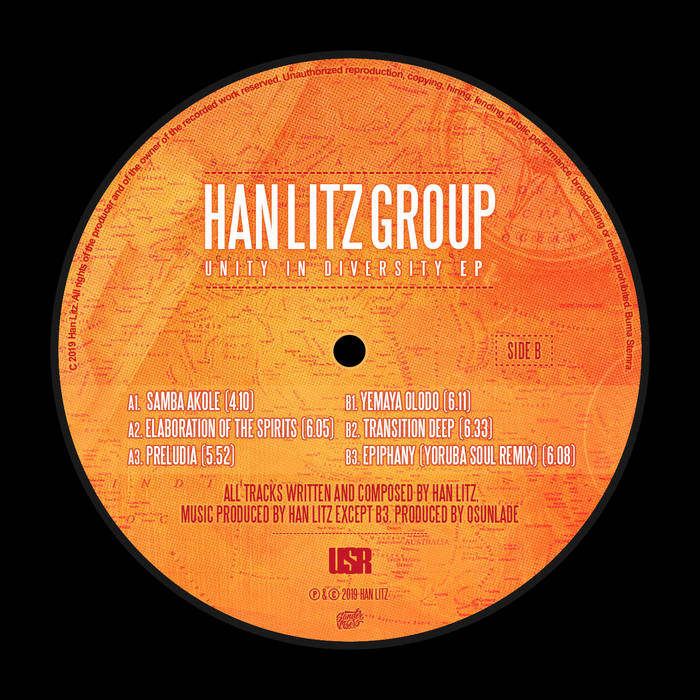 Simona van Tiel Amazing music. Very original, uplifting, inspiring and heart and soul touching compositions performed by wonderful musicians. Han's skills as a composer, producer and flutist are impressive. This is deep and at the same time danceable music at its best!

lucasbenjamin Gorgeous and versatile release! Han's flute-playing has a magical tone and this really shines through on all the compositions! Favorite track: Elaboration Of The Spirits.

This digital EP is preceding the upcoming album Unity In Diversity. It's an album sampler consisting of 6 tracks, from which 5 of the tracks derive from the upcoming 12 track album. There's one additional track on this EP, which is a Yoruba Soul Remix by Osunlade of our track Epiphany.

Special thanks to the Wicked Wax label crew and especially Lucas Benjamin for your dedication and for choosing these specific tracks from the upcoming Unity In Diversity album for this vinyl release.

All tracks mixed by Han Litz, mastered by Errol Lem, Clearmastering. Except track 6, Mixed by Osunlade and mastered by Brandenburg Mastering

Han Litz is Amsterdam’s most versatile jazz flutist, making crossovers to dance, african, soul, funk, Brazillian and tribal music “While performing, I want to boost the energy level. Create unity.” He can be heard on labels like King Street, Yoruba, Peng, Nulu, Sonar Kollektiv. For his own band Han Litz Group, he produced three albums, 'Epiphany', 'Epiphany Electrified' and 'Unity In Diversity'. ... more

Bandcamp Daily  your guide to the world of Bandcamp

Featuring appearances from Kari Faux, Bluestaeb and and interview with NY-bred artist Wiki